Artemis: Back to reality: Do 'real economy' stocks now have an advantage?

What could monetary tightening mean for old-fashioned industries such as energy? Could it benefit those companies that keep the ‘physical economy’ ticking over? The managers of the Artemis Monthly Distribution Fund examine the issues.

FOR PROFESSIONAL AND/OR QUALIFIED INVESTORS ONLY. NOT FOR USE WITH OR BY PRIVATE INVESTORS. CAPITAL AT RISK. All financial investments involve taking risk which means investors may not get back the amount initially invested.

When did civilisation reach its zenith? For FT columnist Janan Ganesh, it occurred in the second quarter of 2017, when an Uber “would arrive in one minute and cost about as many pounds per mile”.

Five years ago, a combination of abundant cheap labour and the willingness of loss-making tech companies to subsidise taxis and food delivery platforms allowed the middle-class inhabitants of major cities to live “frictionless” lives. It couldn’t last. As Janan explains, “it was built on abundant labour and easy funding rounds for unprofitable companies in a zero-interest rate world.”

The world has changed since then. Life is no longer quite so frictionless, no longer so cheap: Ubers are hard to come by; there are queues and cancellations at airports; lacking staff, hundreds of bars and restaurants across the UK have pulled down their shutters. Meanwhile, prices at the petrol pump have surged and there are dark rumours that gas shortages will mean rationing in Europe this winter.

Back to reality: the regime change in economies and markets 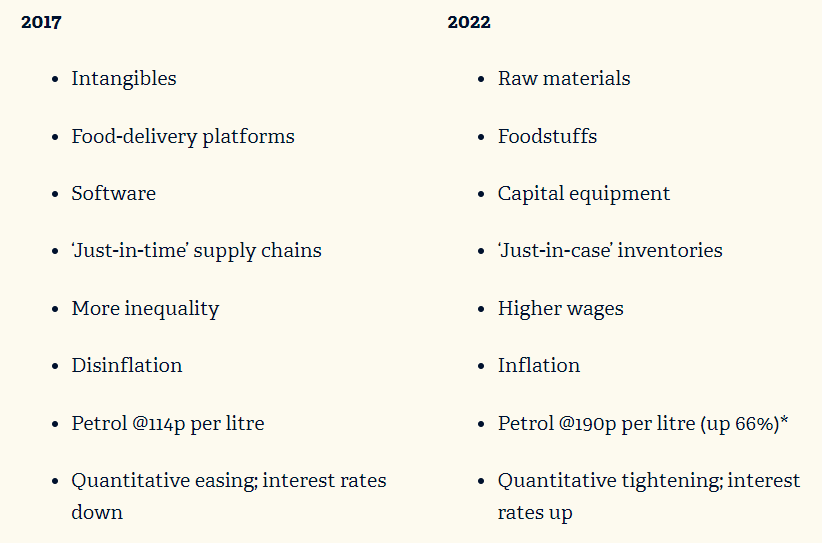 Some of that is a consequence of deglobalisation, war and pandemic-related damage to supplies. But it is also consequence of a long period of malinvestment – and of the profound changes now unfolding in financial markets.

A decade of QE resulted in a serious misallocation of capital

The policies central bankers used to reassure markets in the decade that followed the financial crisis – initially to prevent bond markets from seizing up, then to see off deflation and finally to calm markets rattled by the outbreak of the Covid pandemic – resulted in enormous malinvestment.

In many cases, these companies’ shareholders or bondholders were funding eyewatering operating losses, with products and services – such as the cheap Uber rides Janan enjoyed in 2017 – being provided at below-cost. Yet despite their dependence on massive ongoing subsidies, the share prices of many of these lossmaking companies kept rising.

For funds like the Artemis Monthly Distribution Fund, that was, at times, painful. The main promise we make to our unitholders is to strive to provide them with a good level of monthly income. Almost by definition, we focus on companies that generate the chunky, reliable free cashflows needed to meet coupon payments on their bonds and to pay dividends to their shareholders. This means we prefer mature companies making profits today. Rather than companies that are burning cash in the hope of making profits tomorrow, the companies we own tend to be selling goods and supplying services in the ‘real world’ of today.

Look at our portfolio and you’ll find bonds issued by a healthcare REIT (Medical Properties Trust), the shares of a brewer (Molson Coors), bonds issued by a company that rents mobile modular buildings (Modulaire Group) and the equities of a fertiliser business (Nutrien).

In the long-duration world created by QE, where the promise of jam tomorrow seemed preferable to the certainty of jam today, our focus on companies that are returning capital – rather than for businesses burning through cash as they chased growth – looked out of step with the zeitgeist. Today, however, things are changing…

After a long period of underinvestment in the ‘physical economy’…

The flip side of the deluge of capital being offered to growth stocks was that – in relative terms – the cost of capital for established, profitable companies in old-fashioned industries increased. As a consequence, for almost a decade, we saw underinvestment in some of those companies who keep the physical economy ticking over:

In the case of the energy companies, the market was, in effect, dissuading them from investing in new fields, building new refineries or committing the capital needed to maintain and replace productive assets as they matured and degraded. Instead, it was signalling a preference for providing city dwellers with cheap taxi rides and heavily subsidised food deliveries.

Perhaps the clearest example of this process can be seen in the refinery sector – a defiantly unglamorous, dirty, ‘old economy’ industry whose various products nonetheless remain essential to the modern economy. Designing and assembling the byzantine riddle of pipes, tanks and distillation columns that comprise a modern refinery is both costly and time-consuming.

A long period of low oil prices (and the greater attention being paid to ESG scores) made capital markets reluctant to fund new refining capacity: a full-scale refinery cost as much as $10 billion to build and take as long as a decade to complete.

The result is that refiners in the US have, over the past three years, retired capacity equivalent to around two million barrels of oil a day – enough petrol to fuel an estimated 30 million cars. As demand for petrol, aviation fuel and the host of petrochemicals that refineries produce roared back after the pandemic, the capacity to meet that demand was no longer there. The increase in the ‘crack spread’ – the pricing differential between a barrel of crude oil and the petroleum products refined from it – shows what happens when price-inelastic demand encounters fixed supply. 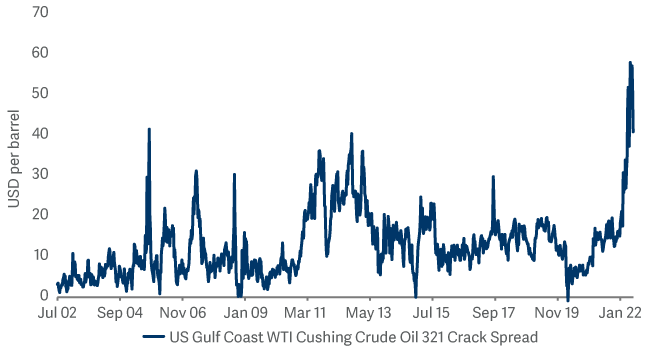 The snap-back in demand after the pandemic and the disruption caused by the war in Ukraine were both important triggers for revealing the lack of spare capacity in some basic industries. But investors need to recognise that they are not the only underlying causes of the inflation we see around us today. That carries important implications for your investment portfolio.

A new-found appetite for old virtues

As the world of quantitative easing gives way to one of quantitative tightening, companies who can offer little more than a good long-term ‘story’ can no longer rely on capital markets to fund their operating losses. This should give large, established cashflow-positive incumbents an advantage.

At the same time, established companies in certain industries now find that they have an enormous amount of pricing power. As critics of the oil majors have noticed, their profit margins are increasing. And as their margins increase, the bonds and equities of these ‘old fashioned’ companies are becoming ever more attractive for investors, particularly those seeking income.

For example, Exxon’s US refineries will generate more profits for their parent company in the second quarter of this year than they did in the previous nine quarters combined. (We currently own shares in ExxonMobil as well as in US-based refiner Philips 66).

It won’t stay this way forever, of course. In time, excess profits will attract capital and new capacity will come online. But it will take years – sometimes decades – to build new refineries, to bring new energy fields online, to build new pipeline networks and to construct new fertilizer factories.

In the meantime, we believe the cashflow-positive companies in the real economy will be able to reward their shareholders and bondholders rather more handsomely than loss-making businesses in the metaverse. Cold, hard financial reality has suddenly intruded on our once frictionless world – it might be with us for a little while longer.

To find out more about Artemis visit the website at www.artemisfunds.com.

FOR PROFESSIONAL AND/OR QUALIFIED INVESTORS ONLY. NOT FOR USE WITH OR BY PRIVATE INVESTORS. This is a marketing communication. Refer to the fund prospectus and KIID/KID before making any final investment decisions. CAPITAL AT RISK. All financial investments involve taking risk which means investors may not get back the amount initially invested.

Investment in a fund concerns the acquisition of units/shares in the fund and not in the underlying assets of the fund.

Reference to specific shares or companies should not be taken as advice or a recommendation to invest in them.

For information on sustainability-related aspects of a fund, visit www.artemisfunds.com.

The fund is an authorised unit trust scheme. For further information, visit www.artemisfunds.com/unittrusts.

Third parties (including FTSE and Morningstar) whose data may be included in this document do not accept any liability for errors or omissions. For information, visit www.artemisfunds.com/third-party-data.

Any research and analysis in this communication has been obtained by Artemis for its own use. Although this communication is based on sources of information that Artemis believes to be reliable, no guarantee is given as to its accuracy or completeness.

Any forward-looking statements are based on Artemis’ current expectations and projections and are subject to change without notice.

Issued by Artemis Fund Managers Ltd which is authorised and regulated by the Financial Conduct Authority.